“Christ used the flesh and blood of Mary for his life on earth, the Word of love was uttered in her heartbeat. Christ used his own body to utter his love on earth…In this the Christian life is a sacramental life. This Advent God invites you to touch, and taste, and smell. Listen to your body this Advent. Stretch your senses and taste and see that the Lord is good.”—Caryll Houselander, woodcarver and mystic

“When John heard in prison of the works of the Messiah, he sent his disciples to him with this question, ‘Are you the one who is to come, or should we look for another?’ Jesus said to them in reply, ‘Go and tell John what you hear and see: the blind regain their sight, the lame walk, lepers are cleansed, the deaf hear, the dead are raised, and the poor have the good news proclaimed to them.’”— Matthew 11:2-6

This is Guadete Sunday. We light the third Advent candle as a sign of joy. It is to remind us that when we dream like God dreams—wild visions flowing over with grace, and justice, 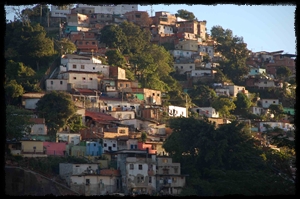 and mercy—then our road will be lit by this third candle.

Sometimes it is hard for us to feel the scriptures in our bones until we see them acted out. In Venezuela I met a nun who for twelve years had worked in a poor neighborhood located on a steep hillside high over Caracas. Her name was Sr. Begoña. She had been a religious Sister of the Sacred Heart for many years in Spain before moving to Venezuela.

Sr. Begoña talked about the change that she had seen in the self-image of the poor since the government began prioritizing social programs for “the least of these.” Initially, she was very skeptical of the Venezuelan president. He had a military background and she’d grown up in Spain under General Franco. She had no use totalitarian leadership. She was also skeptical of how successful government programs could be in helping the poor. Would they create dependence? What happens when a new administration comes into office? “But,” said Sr. Begoña, “I have lived in this neighborhood for a long time and the poor were for the government programs and for the president. I decided that I would take my chances with the poor, with the people. They were first to understand the new national project.” She said that if the government programs were a mistake she would still rather err with the people than against them.

Not long after making this decision, the neighborhood people invited her to a big march in support of the national agenda to give preferential option to the poor. The day arrived and hundreds from her neighborhood walked the two hours down the hillside into the Caracas city center. Along the way they were joined by thousands of other very poor people from the slums that ring Caracas. There was singing and chanting and laughing—a palpable energy of joy, hope, and possibility. “I always wondered what it meant in the Gospel that the blind saw, the deaf heard and the lame walked,” said Sr. Begoña, “but on that day I was walking with poor people who were blind and deaf and lame. Suddenly, I began to understand—because they were seeing and hearing and walking.”

Where do you see the gospel brought to life?

With gratitude to Pax Christi USA where some of these reflections first appeared in print.