Fr. Dan Berrigan: ‘Peace I Leave With You’ 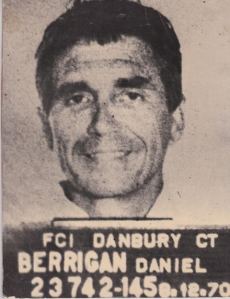 Today, on the Feast of St. Joseph the Worker, we celebrate the life of Daniel J. Berrigan, a Jesuit priest of “uncommon conscience,” as William Stringfellow called him. (See my earlier post.)

Heidi and I attended St. Stephens & the Incarnation Episcopal Church today to hear our friend and pastor Linda Kaufman preach. When we made plans to attend, we didn’t know it would be the day after losing Dan. It was the perfect celebration.

It’s in this church that the Holy Week Faith and Resistance retreats, led by Phil Berrigan, Liz McAlister, Art Laffin and others of the East Coast Catholic Worker and Jonah House communities, have been held for decades. Dan Berrigan spent a lot of nights sleeping on the floor in this church basement.

Linda’s sermon drew on the readings for the sixth Sunday of Easter–Revelation 21 and John 14. The political poetry in Revelation was an apt memorial for Dan: Here the wounded lamb is the center of the healing of the nations. And in John 14 Jesus says to his disillusioned and confused disciples: “Peace I leave with you, my peace I give you. I do not give to you as the world gives. Do not let your hearts be troubled and do not be afraid.”

The mantle of the Berrigan brothers and the communities and families with them is laid down for us … to take up in community. We cannot be the peace of Christ alone.

A wake, public witness, funeral Mass and celebration of resurrection will be held in New York City on Thursday and Friday, May 5-6.

Here are bits and pieces of more news about Dan Berrigan’s death (and in us and Christ, his resurrection):

The Life and Death of Dan Berrigan by John Dear