A Parable of Power 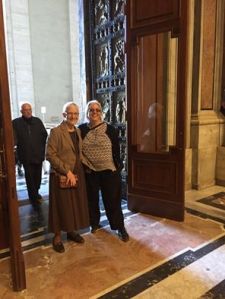 I’m in Rome this week for the first Catholic conference on Nonviolence and Just Peace co-sponsored by the Pontifical Council on Justice and Peace. Here’s a first installment about my adventures. (If you want to skip down to the bottom you’ll find links to the pope’s letter to the gathering and Cardinal Turkson’s address to the gathering.)

Arrived in Rome on Sunday morning and to the Church Village center about 1p. Last night a few of us went to St. Peter’s for Mass. It was overwhelming to be there and see the stunning artwork inside, listen to the choir, hear the Mass in Italian, and give thanks with the homily that the great strength of the church is love. (Now, we just need to live that out!) Marie Dennis (co-president of Pax Christi International) and I walked through the Jubilee Doors opened by Pope Francis for this year of focusing on Mercy. Apparently, walking through this door also conveys “indulgences” (which I don’t think the Church believes in anymore). So whatever indulgences I gained (is there an app tracker for that?) I immediately spent in a small act of ecclesial disobedience. In attending communion I held out my hands to receive the host from the priest (as is the custom in the U.S. and accepted worldwide practice I believe for at least 40 years). He refused to offer me the host in my hands. After some “exchange” (ahem) that caused the usher to come forward and indicate I should hurry up, I accepted the host on the tongue. This seemed preferable to having the host become the object of a tug-of-war, especially since I’m here for a conference on nonviolence. However, the entire exchange serves as parable for me. At the Catholics highest point of sacrifice and peace, we are still fighting over rules and power. I’m as guilty of that as he is. After receiving the host, I said “peace be with you” to the priest. May God bless his soul. And mine too.–Rose Marie Berger

Pope Francis’ letter to Conference on Nonviolence and Just Peace:

The basic premise is that the ultimate and most deeply worthy goal of human beings and of the human community is the abolition of war.[6] In this vein, we recall that the only explicit condemnation issued by the Second Vatican Council was against war,[7] although the Council recognized that, since war has not been eradicated from the human condition, “governments cannot be denied the right to legitimate defence once every means of peaceful settlement has been exhausted.”[8]

Another cornerstone is to recognize that “conflict cannot be ignored or concealed. It has to be faced.”[9] Of course, the purpose is not to remain trapped within a framework of conflict, thus losing our overall perspective and our sense of the profound unity of reality.[10] Rather, we must accept and tackle conflict so as to resolve it and transform it into a link in that new process which “peacemakers” initiate.[11]

Peace in society cannot be understood as pacification or the mere absence of violence resulting from the domination of one part of society over others. Nor does true peace act as a pretext for justifying a social structure which silences or appeases the poor, so that the more affluent can placidly support their lifestyle while others have to make do as they can. Demands involving the distribution of wealth, concern for the poor and human rights cannot be suppressed under the guise of creating a consensus on paper or a transient peace for a contented minority. The dignity of the human person and the common good rank higher than the comfort of those who refuse to renounce their privileges. When these values are threatened, a prophetic voice must be raised. (§218)