Maundy Thursday: The Crux of the Matter is Love 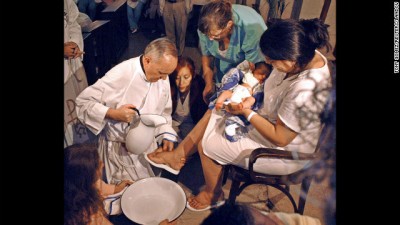 Holy Thursday or Maundy Thursday reminds us that the commandment to love is the crux of our discipleship. Perversely, some in the Catholic hierarchy have chosen Holy Thursday to venerate a male priesthood, male apostolic succession, and clericalism. While Holy Thursday is also clearly about the institution of the Eucharist, it is equally clearly not about male essentialism. The word “maundy” comes from the Latin mandatum, the first word of the phrase “Mandatum novum do vobis ut diligatis invicem sicut dilexi vos” (“A new commandment I give unto you, That you love one another; as I have loved you” John 13:34).

This year, Pope Francis has “changed the rubrics of the Roman Missal” to move us forward toward a more faithful celebration. He has revised the foot-washing ritual on Holy Thursday to indicate that the rite should no longer be limited to men and boys, but also include women and young girls. Those participating in the ceremony should be representative of the entire community.

Below is an excerpt from Rite & Reason: If Jesus can wash his followers feet women can lead the church by Soline Humbert (Irish Times, Mar 22, 2016):

When Jesus washed his disciples’ feet he took on not just a servant’s role but a female servant’s role, for it was mostly women and girls who performed this task: servants for their masters and important guests, wives for their husbands.
Significantly, the only other person in the Gospels who washes feet is a woman, who washes Jesus’s own feet (Luke 7), and in Paul’s letter to Timothy (5:10) it is specified that “the widows must wash the feet of the saints”.

When Jesus washed His followers’ feet He subverted not just the master/servant power relationship but also the male/female relationship. Jesus made Himself a servant girl, a female slave, a wife. He transgressed the strict rules delineating gender roles.

When He removed his outer vestment, Jesus stripped Himself of His male privileges of power and superiority. He wrapped a towel around His waist, as females did. No wonder Peter first objected so vehemently!

It is therefore deeply ironic that the official liturgy remains so wedded to a strict sexist, patriarchal division of gender roles as does the theology and organisation of the institutional church. Because of their gender women remain excluded from governance, decision making and all the ordained ministries. …–Soline Humbert