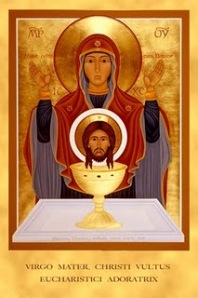 The major problem of eucharistic theology in our century is not that people do not understand and value the meaning of Eucharist. The problem is that they do.

The Eucharist, every child learns young, is the sign of Christian community, the very heart of it, in fact. And who would deny the bond, the depth, the electrical force that welds us together in it? Here, we know, is the linkage between us and the Christ, between us and the Gospel, between us and the Tradition that links us to Jesus himself and to the world around us. No, what the Eucharist is meant to be is not what’s in doubt.

What’s in doubt is that the Eucharist is really being allowed to do what it purports to do—to connect us, to unify us, to make us One. The truth is that as much as Eucharist is a sign of community it is also a sign of division. For the sake of some kind of ecclesiastical political fiascos centuries ago between the East and West, we close the table between Orthodox and Uniate—though the faith is the same and the commitments are the same and the vision of life and death are the same.

What’s in doubt, too, is that the division between baptized men and baptized women can possibly witness to what we say is the faith: that men and women are equal; that women are fully human beings; that God’s grace is indivisible; that discipleship is incumbent on us all; that we are all called to follow Christ.

At the end of one presentation after another, women make it a point to continue the discussion with me. “I used to be Catholic,” they begin. “I was a Catholic once,” they say. “I’m a recovering Catholic now,” they announce. It’s a sad litany of disillusionment and abandonment by a Church they once thought promised them fullness of life and then let them know it is their very persons that deny them that.

Call it “holy” communion if you want, they tell me, but it’s not. Not like that. Not under those conditions.

So they go away to where Jesus waits for them, arms open, in someone else’s Christian church. There’s something about it that simply defies the lesson of Mary Magdalene or the Woman at the Well or Mary of Bethany or Mary of Nazareth. They go where every minister of the altar, every bishop, every lawgiver, every homilist, every member of every Synod on the planet is not male. They go where they can see “the image of God” in themselves in another woman. They go where eucharistic theology, which we’re told makes us one, is palpable.–Joan Chittister