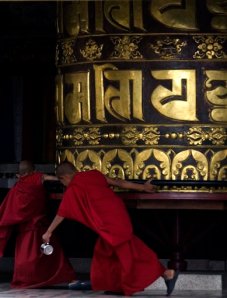 In Tibetan Buddhist tradition, one practice in some monasteries is to turn massive beautifully crafted prayer wheels. Each rotation of the wheel will have much the same meritorious effect as orally reciting the prayers. In my Christian interpretation, it is another way of fulfilling Paul’s invitation to “pray without ceasing.”

Whenever I hear the “prayers of the people” at worship, I think of a prayer wheel. When people ask me to pray for them, I often respond “I will put it in the prayer wheel.” In my imagination it is an active ongoing place in my heart where I tuck away the needs of humanity and let the wheel spin forward into the heart of God.

At Sojourners, Julie Polter has for years produced our little internal community newsletter — one manifestation of our communal spinning of the prayer wheel. I’m so grateful for it. I think some version of this “newsletter of need, thanksgiving, and praise” has been in the church since the early days. Here’s a recent example of ours:

Sojo staffer Rose Marie Berger and 53 others were arrested today in an act of civil disobedience organized by 350.org at the headquarters of the Environmental Resources Management (ERM)company in downtown D.C. today. Most likely they were going to be allowed to post bond and go home, but I’ve not heard an update. Please remember them in your prayers (in case they’re still waiting for release—arrestees included one person using a walker), and continue to pray for efforts to counter the creeping catastrophe of climate change. ERM is the “independent contractor” hired by the State Department (and regularly used by TransCanada) that assessed the Keystone XL pipeline to be “climate neutral.” Poke around the 350.org twitter feed and you can find links to photos of the action. https://twitter.com/350

Charles Stanfield, dear friend of Sojo staffer Cindy Martens, died last Friday, July 19, while swimming in the Shenandoah River near his home; a full autopsy isn’t completed yet, but the initial indications are that he may have been killed by a lightning strike from a sudden storm that blew in. Charles was an artist, an arborist, a theologian, a poet, and musician–and a man always ready to literally give the shirt off his back to anyone in need. Cindy was friends with Charles for more than 30 years, and they were married for several of those. Memorial service plans are still being sorted, but may be as early as Aug. 3. Please keep Cindy, and all others who mourn Charles, in your prayers. Cindy thanks everyone for the prayers and kind messages she has received the past few days.

An update on Tricia Spivey, from Ed: “The pathology report from her lumpectomy indicates the need for more surgery to remove additional tissue to obtain a wider “margin” (the area around the lump which may contain microscopic cancer cells separate from the original tumor). The decision will be based on whether more tissue can be obtained. After any additional surgery, chemotherapy and radiation will follow in the fall and winter, with the usual side effects, most of them unpleasant, but in the end worth the trouble. The oncologist said that, after all procedures are followed, Tricia’s likelihood of recurrence will be reduced to less than 15%, a good number.” Tricia and Ed welcome your ongoing prayers.

Please pray (and call, and petition) for the Dream 9, including former Sojo semester intern Marco Saavedra, who were detained trying to re-enter the U.S. from Mexico. Jonathan Wilson-Hartgrove’s has a poignant report. Go here to take action: http://action.dreamactivist.org/bringthemhome

Thanksgivings lifted with former Sojo staffer (now with Community of Hope) Leah Garrett: her sister Naomi Brodock’s surgery for colon cancer this past week went well. “With a little more chemo the doctors expect that this disease will be behind her by the end of the year.” Continue to pray for Naomi and her husband and two young children.

We continue to remember those recovering from surgery and other procedures: Elizabeth Palmberg * Jim Wallis * Father Joe Nangle of Assisi Community.

For the family of Trayvon Martin, with thanksgiving for the ongoing witness to faith, dignity, and truth by his parents.

For all in times of searching or transitions—current interns, future interns, now-former staffers, staffers wrapping up contracts and searching for the next thing, people interviewing to join our staff, and all others who might need peace of heart, discernment, or the freedom to dream wildly.