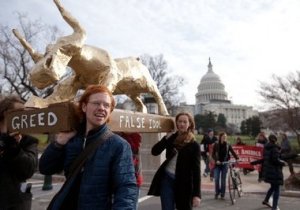 Yesterday, Pope Francis addressed a gathering of new ambassadors with his first major analysis on the causes of the global financial crisis.

I appreciate how he makes the connection between ethics and God. In our post-Enlightenment world, we are strong on human ethics as separated from religion. But against cancerous market capitalism, ethics separated from human solidarity and God are not powerful enough. Ethics then simply becomes a new thing to be manipulated in the market place.

“…Our human family is presently experiencing something of a turning point in its own history, if we consider the advances made in various areas. We can only praise the positive achievements which contribute to the authentic welfare of mankind, in fields such as those of health, education and communications. At the same time, we must also acknowledge that the majority of the men and women of our time continue to live daily in situations of insecurity, with dire consequences. Certain pathologies are increasing, with their psychological consequences; fear and desperation grip the hearts of many people, even in the so-called rich countries; the joy of life is diminishing; indecency and violence are on the rise; poverty is becoming more and more evident. People have to struggle to live and, frequently, to live in an undignified way. One cause of this situation, in my opinion, is in the our relationship with money, and our acceptance of its power over ourselves and our society. Consequently the financial crisis which we are experiencing makes us forget that its ultimate origin is to be found in a profound human crisis. In the denial of the primacy of human beings! We have created new idols. The worship of the golden calf of old (cf. Ex 32:15-34) has found a new and heartless image in the cult of money and the dictatorship of an economy which is faceless and lacking any truly humane goal.

The worldwide financial and economic crisis seems to highlight their distortions and above all the gravely deficient human perspective, which reduces man to one of his needs alone, namely, consumption. Worse yet, human beings themselves are nowadays considered as consumer goods which can be used and thrown away. We have started a throw-away culture. This tendency is seen on the level of individuals and whole societies; and it is being promoted! In circumstances like these, solidarity, which is the treasure of the poor, is often considered counterproductive, opposed to the logic of finance and the economy. While the income of a minority is increasing exponentially, that of the majority is crumbling. This imbalance results from ideologies which uphold the absolute autonomy of markets and financial speculation, and thus deny the right of control to States, which are themselves charged with providing for the common good. A new, invisible and at times virtual, tyranny is established, one which unilaterally and irremediably imposes its own laws and rules. Moreover, indebtedness and credit distance countries from their real economy and citizens from their real buying power. Added to this, as if it were needed, is widespread corruption and selfish fiscal evasion which have taken on worldwide dimensions. The will to power and of possession has become limitless.

Concealed behind this attitude is a rejection of ethics, a rejection of God. Ethics, like solidarity, is a nuisance! It is regarded as counterproductive: as something too human, because it relativizes money and power; as a threat, because it rejects manipulation and subjection of people: because ethics leads to God, who is situated outside the categories of the market. God is thought to be unmanageable by these financiers, economists and politicians, God is unmanageable, even dangerous, because he calls man to his full realization and to independence from any kind of slavery. Ethics – naturally, not the ethics of ideology – makes it possible, in my view, to create a balanced social order that is more humane. In this sense, I encourage the financial experts and the political leaders of your countries to consider the words of Saint John Chrysostom: ‘Not to share one’s goods with the poor is to rob them and to deprive them of life. It is not our goods that we possess, but theirs’ (Homily on Lazarus, 1:6 – PG 48, 992D). …”–Pope Francis, May 16, 2013