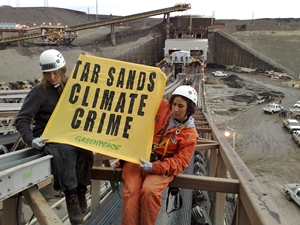 The United Church of Canada voted on Tuesday to “categorically reject” the tar sands pipeline project that would carry highly toxic, climate-killing unconventional tar sands petroleum through pristine First Nation’s land in Alberta to British Columbia where it would be shipped on supertankers to China for processing. The so-called Northern Gateway pipeline is the Canadian end of the controversial Keystone XL pipeline proposed in the U.S.

In the U.S., some have argued that we should accept the tar sands Keystone XL pipeline because if we don’t the toxic petroleum from Alberta will just get shipped to China through a East-West pipeline. But the First Nations people and Canadian Churches are continuing to fight to make sure that pipeline never gets built. There may also be a strategic church divestment strategy to make sure that the United Church of Canada does not have any stockholdings in companies related to TransCanada, Enbridge, or affiliates.

In the U.S., we must do the same. In fact, ranchers and others in Texas are training this summer to nonviolently block with their bodies the pipeline construction bulldozers scheduled to begin clearing land soon.

Again, if we are to have any hope of reversing global warming, we must do these three things:

1. Divest or get active regarding all stockholdings in these six corporations: ExxonMobil, ConocoPhillips, Chevron, Peabody, Arch, and BP. These are the primary oil, natural gas, and coal companies operating in or through the United States that top the charts as carbon polluters. If Americans focus on U.S. companies, then we can be the tipping point for a transnational shift. If you — or the portfolio you influence — own stock, then get rid of it and tell the company why. If you don’t want to divest, then you need to decide now to become a shareholder activist. If you’re not a stockholder, then pressure your faith institutions, universities, and local governments to get out of “planet-killing” profits. This is the economic part of the plan.

2. Push for carbon “fee-and-dividend” laws on corporate carbon emitters at the local, state, and federal level. No more free rides for oil, gas, and coal companies. You pay taxes to have your garbage hauled away. Why shouldn’t they? The fee is charged at the point of origin or point of import on greenhouse gas emitting energy (oil, gas, and coal). The fee is progressive (increases gradually) over time. The fee is returned directly to the public in monthly dividends to individual taxpayers, with limited-to-no government involvement. Australia initiated this legislation in June. We can learn from them. This is the legislative part of the plan.

3. Take personal responsibility. Everyone can continue to limit energy consumption, use renewable energy sources, and build out a sustainable footprint for our homes and churches. But we also need people to step up and put their bodies on the line to stop the mining of tar sands in Alberta, Canada, and prevent the construction of the Keystone XL and Northern Gateway pipelines that are being built to transport Alberta’s unconventional “tar sands” oil. Scientists around the world say that opening the Alberta tar sands and pumping this non-traditional oil through these pipelines will put the planet on a one-way road to climate disaster. That’s why fighting the Keystone XL Pipeline in the U.S. and the Northern Gateway Pipeline in Canada is critical. This is the direct action and personal responsibility part of the plan.

The 41st General Council has instructed Nora Sanders, the United Church’s General Secretary, to make a public statement “categorically” rejecting construction of the Enbridge Northern Gateway Pipeline, which has a proposed route stretching from northern Alberta to Kitimat, British Columbia.

Due to the timely nature of the pipeline review hearings, commissioners asked that this be accomplished soon. In addition, Sanders has been asked to communicate this decision to all courts of the church, the governments of Canada, Alberta, and British Columbia, Enbridge, and all Canadians through media outlets. …