Joan Chittister: ‘In the Studio of Life’ 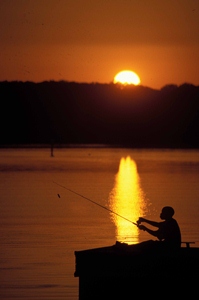 “Happiness does not come quickly. It is not conferred by any single event, however exciting or comforting or satisfying the event may be. It cannot be purchased, whatever the allure of the next, the newest, the brightest, the best. Happiness, like Carl Sandburg’s fog, “comes on little cat feet,” often silently, often without our knowing it, too often without our noticing.

The problem is that we don’t like “slowly” anymore. In anything. We want instant wealth and instant success. As a result, we have not a clue about the layers of enrichment that come with learning to live slowly.

The beauty of learning to cast a lure and wait for hours for a tug on the line that may never come escapes us now. We buy our fish; we don’t catch it. We get it filleted and packaged in cling wrap instead of wet and shiny from the sea. We get our fruit peeled and chopped at the delicatessen. We don’t pick it from the trees anymore. We miss the moment of stopping to watch the sun go down before we pull the fish in over the stern or climb down the ladder with the basket of cherries.

So how can we possibly have the patience to extract the meaning of the moments of our lives as we race through them from one to another?

George Vaillant’s historic longitudinal study of Harvard men and Lewis Terman’s similar study of men and women trace the slow unfolding of a person, of their live and most of all, of the understanding of their lives. Asked again and again over the years what they would most have wished could have been changed for them, the men and women in the study were more likely as they got older to say “nothing.” They would, they declared, change nothing of it. Not the deaths, not the embarrassments, not the struggles, not the losses. To change anything in their personal histories, they had come to realize, would have diminished the gem that was their lives, that had been cut and shined slowly in the studios of life, that had made them what, at the end, they had finally become.

Clearly, happiness is an acquired taste. It comes from being steeped in the truths of life long enough to have learned not only how to survive them but how to get beyond the cosmetics of them to drink from the root of them. It is a many splendored thing, this movement from being alive to being full of life. It comes in many stages, made up of many experiences. It takes a lifetime of learning both how to be with others and how to be alone.”–Joan Chittister, OSB

From Happiness by Joan Chittister